PROJECT CHALLENGE + SOLUTION
Byron Center Public Schools pursued the development of their site at their West Middle School Site for an Athletic Complex. The proposed site location contains the current Middle School but was otherwise undeveloped and was previously fields and farmland. The site measured approximately 148 acres with roughly 73 acres being developed.

A portion of this site was developed as an athletic complex, approximately 23 acres, consisting of a synthetic turf soccer field, a grass practice field, twelve tennis courts, and two buildings consisting of team rooms, storage, and public restrooms. The proposed project met the current needs as well as accounted for future expansion within the Athletic Complex.

Associated with this phase of the project, is the development of the site for future expansion and development for the district. An on-site road is proposed to connect the site to public roads on the north and west and will improve circulation for their current middle school, approximately 50 acres. The breakdown of uses is as follows:

Site: A 73-acre proposed development that houses a new athletic complex consisting of a turf soccer field, a grass practice field, 12 tennis courts, two buildings consisting of team rooms, storage, and restrooms, with approximately 120 parking spaces along a proposed on-site road.
Soccer Field: A Turf Soccer field (81,000 sf), with logo and striping to meet High School Soccer competition requirements was also designed. The turf extends to the fence line, except on the east side of the field where it extends to a concrete pad outside the Team Building.
Practice Field: A grass practice field (69,000 sf), is to be seeded grass with irrigation, sport lines to be painted by owner as needed.
Tennis Courts: Twelve post-tension tennis courts with 12’ end court fencing and 3’ side court fencing. Raised area between the courts will be raised planters that provide space for bleachers to be recessed.
Team Building: A (4,485 gross sf) building with team rooms, public restrooms, a concession room, trainer room, storage, and an electrical / mechanical room.
Storage Building: A (1,380 gross sf) unheated building for storage.
Entry Gate: Six pillars with ornamental gate and signage at entry of the Athletic Complex.
Landscape: Raised beds with natural ornamental vegetation throughout Athletic Complex and near parking lot. 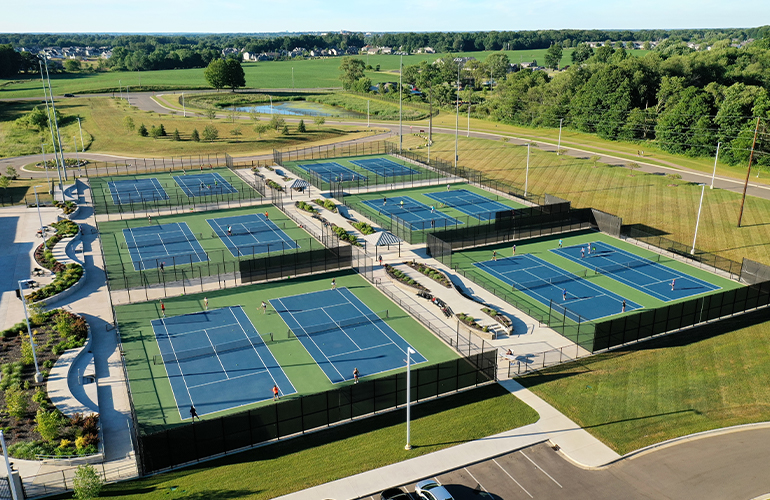 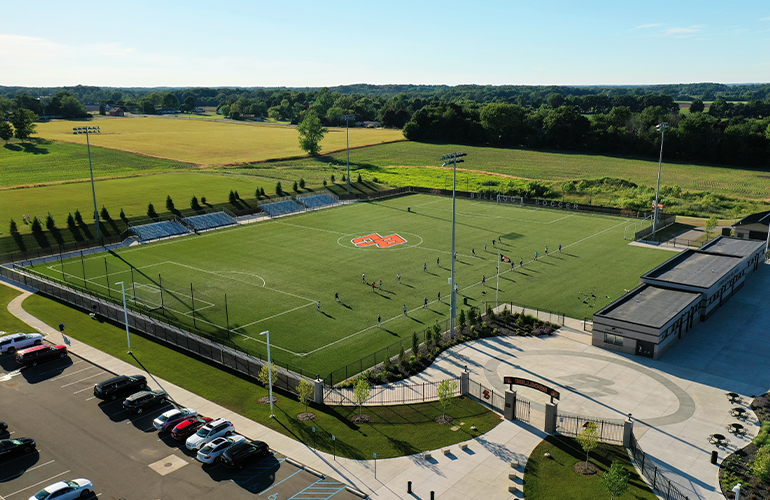