[email protected] is a 40-acre premier new retail center located at the intersection of U.S. 131 and Stadium Drive in Kalamazoo. Anchored by Costco and Field & Stream, the development is bordered by two multi-tenant spaces designed by TowerPinkster. The facilities are positioned along Stadium Drive and Drake Road. The Shoppes were designed at a welcoming pedestrian scale featuring a warm blend of stone, brick, and cedar, metal, and cement board panels. Materials were applied in varying ways to each retail unit to create differentiation. Eight of the units were planned similar in size, ranging from 1,300 – 1,800 square feet yet were structurally spaced to allow multiple units to be combined should the opportunity present itself. Each building has a single larger unit with corner spaces highlighted through distinctive architecture. A mix of public and private outdoor areas surround the corner units. They are placed in front of the main entry off of Drake Road to increase visibility and encourage entry into the plaza.

One of the developments was a 7,800-square-foot open air shopping plaza located on a 1.5-acre site on the busy Gull Road corridor, a primary retail destination in eastern Kalamazoo County. The development was intended to house up to five tenant spaces, one of which had a drive-thru window. Featuring a creative mix of cast stone, brick, and cedar accents, the timeless design aesthetic is modern, fresh, and inviting, and intended to compliment the neighboring Pizza Hut / Panera Bread facility.

This project was a second phase of the existing 13,000 square foot Greenspire Shoppes in Portage along West Centre Avenue. This project remains in the concept design phase, as developers seek additional funding. Phase one was constructed in 2011, and this second development was designed with an additional two buildings, each approximately 11,000 square feet located on two acres to the west of the existing Greenspire Shoppes. The new Class A retail center would have a corner drive-thru unit and space for up to eight tenant units. The timeless design aesthetic would compliment the adjacent retail center, creating a cohesive shopping and dining experience. 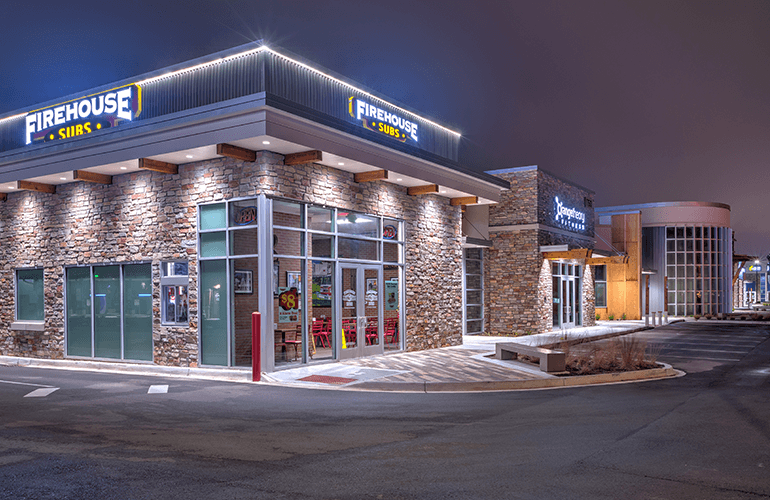